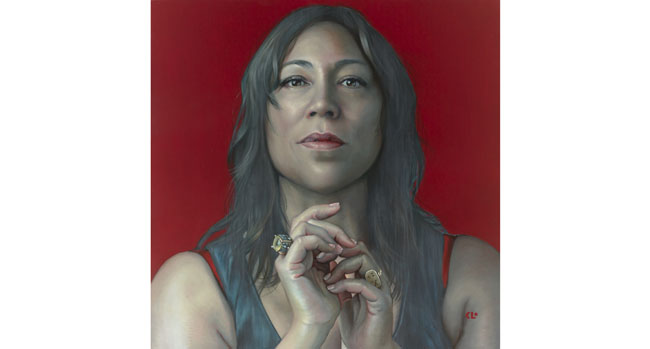 The packers chose the celebrated soul, jazz and pop artist's portrait from 52 finalists' works on display at the Art Gallery of NSW.

Longhurst's work is the second portrait of the three-time ARIA award winner to take the Packing Room Prize in its 30-year history, following Peter Robertson's win in 1994.

Ceberano, 54, was also the subject of an Archibald Prize 2010 finalist portrait by Christine O'Hagan.

There were 938 entries submitted for the Archibald Prize, which is celebrating its centenary.

Longhurst was previously a finalist in the Archibald Prize in 2018 and the Sulman Prize in 2012.

The Packing Room Prize's value doubled this year, from $1500 to $3000, and is essentially chosen by head packer Brett Cuthbertson, who holds 52 per cent of the vote.

'I met Kate Ceberano many years ago and Kathrin has really captured her likeness. As soon as I saw the work, I thought, "That's it',' Mr Cuthbertson said on Thursday.

'This is also the first time in my tenure as head packer that I have awarded the Packing Room Prize to both a female artist and female sitter."

Longhurst first spoke to Ceberano last year about collaborating on a portrait but several attempts to get together failed because of lockdowns and border closures.

"I was quite daunted before painting this portrait, as Kate is such an iconic person and there are so many incredible images of her already out there.

"I really wanted to create something new and fresh that captures her personal growth after the devastating consequences of lockdown on the entertainment industry last year.

"I painted her larger than life, looking fiercer and stronger than ever before," she said.

Ceberano who entered the industry as a teenager has released 28 albums over 40 years and was the first woman inducted into the Australian Songwriters Association Hall of Fame in 2014.