SA looks to step back virus restrictions - South Australia has revised a range of COVID-19 restrictions, including opening the border with Victoria, after reporting no new cases linked to the w ...
Man charged over grim find - A man from Cranbrook north of Swansea has been charged with burying his partner's body and failing to report her death to police. Officers acting o ...
Victoria marks unlikely virus-free status - Victoria has eliminated coronavirus, an achievement that one Melbourne doctor notes was unthinkable only three months ago.
Intercity train strike in NSW called off - The NSW Rail, Tram and Bus Union has called off a snap 24-hour strike after the state government cancelled test runs for its new intercity trains.
Assange's partner asks Trump to pardon him - Julian Assange's partner Stella Moris has tweeted US President Donald Trump on Thanksgiving, appealing to him to pardon the WikiLeaks founder.
New COVID cases part of SA cluster - South Australia's bid to contain a worrying COVID-19 cluster has hit a snag with two new cases, a school closed and hundreds of more people forced int ...
$1,720 fine - a warning to rubbish dumpers - Police have issued a hefty fine for the dumping of rubbish, and says it should serve as a warning for those attempting to to the same. An infringem ...
Victorian tourists return to Tas - Tasmanian tourism operators are gearing up for the return of Victorians to the state as border restrictions lift just after midnight tonight. The T ...
Homelessness concerns for convicted youths - The issue of inmates at the Ashley Youth Detention Centre being released into homelessness has been raised in parliamentary hearings. Emotions were ...
Tangled whale warning - Those on the state's east coast are being urged to keep an eye out for an entangled whale calf. The baby humpback and its mother were spotted near ... But today she was reunited with them in a beautiful moment at Hobart Airport, as Tasmania has relaxed its hard border to all states and territories except NSW and Victoria.

This morning's Jetstar flight from Brisbane was the first to touch down under the new rules, which don't require arrivals from safe jursidictions to quarantine.

Emily was one of the quickest passengers off the plane.

"My family is all here. I've been in Queensland by myself. It's been a really tough year and as soon as I could get on a plane, I took the first flight out of there," she said.

"Everything this year's been over FaceTime. I was at the birth of Nina last year and I've only seen her once since that. So obviously to see how much they've grown...Sadie's so tall now. It's just really emotional...it's very overwhelming...even in just in the leadup I was crying and on the plane seeing Hobart...we flew in past Mount Wellington which was really nice." Hobart and Launceston airports have been bolstered by police and biosecurity staff to conduct health checks and questioning on entry.

"We're probably operating at 25-30% from pre-COVID levels. You'll see around us we have a fair number of staff. I would say we're probably at 50% of staff returned today but we'll see that increase in line with more passengers," he said.

A decision on whether NSW will be added to the list of safe zones is expected to be made in the next few days.

New Zealand is in that category and Mr Cocker says negotiations on direct flights to Tasmania are progressing well.

"We're working really closely with the state government on that Trans-Tasman opportunity. We're speaking with the border agencies from the Commonwealth Government to understand exactly what the requirements might be and we're looking forward to continuing to work with them to convert on that opportunity." 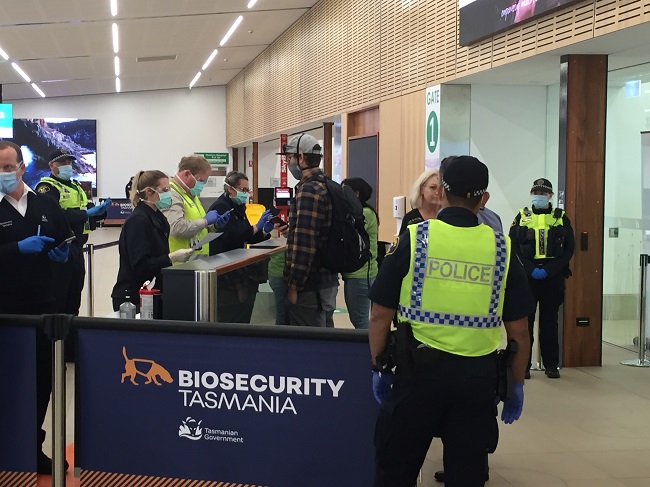